For eight seasons of NBC’s The Voice, Emmy Award winning Lighting Designer Oscar Dominguez of Darkfire Lighting Design has created scintillating lighting and sets worthy of tomorrow’s superstars. The production designs are a major part of the show’s success, and each year Dominguez raises the bar looking for ways to top himself.

Enter Solaris LED Mozart, the compact and versatile pixel-mapping RGB fixture. Already a “fan” of the Solaris LED Flare and Flare Jr., Dominguez recognized Mozart’s versatility and unique potential for foot lighting, uplighting, eye candy, and many other uses. The Voice now features up to 120 Mozarts in an ongoing succession of unique, creative iterations, week after week.

“Without question Mozart will be in our arsenal going forward,” explains Dominguez. “First, the light quality is spectacular; a frosty angelic glow with a shadow-cancelling effect. Second, the camera loves their smooth and creamy dimming. Either pixelated or programmed for solid color, Mozart is extremely flexible and we can place them literally anywhere.”

Dominguez adds, “Finally, we listen to the guys using the tool, and the electricians praise Mozart. They’re reliable and easy to install and dismantle. Mozart is now an integral part of The Voice.”

Called “the perfect pixel,” Solaris LED Mozarts have also been seen on the Usher UR Experience tour; the Beyoncé-Jay Z On the Run HBO Concert Special; the 2015 Grammy Awards; The X-Factor UK finals, and more.

Oscar Dominguez founded Darkfire Lighting Design in 2007 and his credits include many popular TV shows and specials such as The Bachelor; The Bachelorette; Shark Tank; Are You Smarter Than a 5th Grader; I Can Do That; 500 Questions, and many more!

Check out Darkfire Lighting Design at darkfirelighting.com.
TMB is exclusive worldwide distributor of the Solaris LED Mozart: tmb.com/solaris-mozart
Learn about other innovative and exciting products from TMB at www.tmb.com. 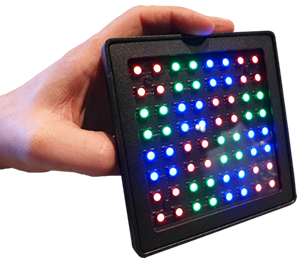