This year many thousands of fans descended on Middlesbrough to enjoy the annual BBC Radio 1 Big Weekend music festival.  For three days, over 50 acts, both new and established, were showcased on three stages.  This type of event requires the most versatile and foolproof lighting network.  To meet this challenge, Neg Earth Lights of London specified ProPlex® Data Distribution – Devices and Cables. 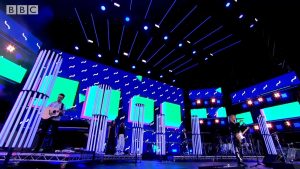 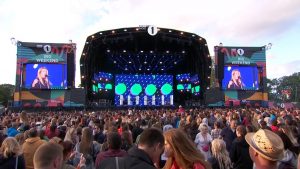 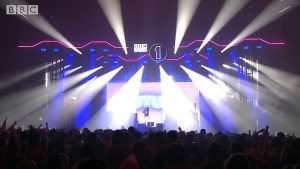 “The ProPlex Devices are very stable,” says Sam Ridgway of Neg Earth.  “We used them at FOH and in stage data racks for a complete festival system:  In addition to the ProPlex Ethernet, DMX and Fibre cabling used throughout, the system included five GBS 10-port and EZ-LAN Gigabit switches; four IQ Nodes; and ten Opto-Splitters.

“This was a ProPlex networking rig through and through,” explains LD and Network Tech Nige Holbrough.  “In every case throughout the weekend we were able to quickly accommodate every request for network or data connections and changes at FOH and on stage.

“The modular nature of the ProPlex GBS 10-port RackMount Switch allowed the configuration of main and backup networking within the stage data rack for optimum arrangement of network ports, in this case with most ports placed ‘Internally’ for linking between Switches and Nodes.

“The EZ-LANs were ideal for the stage ‘guest’ data rack and the FOH data rack as it was simple and clear to see how the ports were allocated to the various VLANs, indicated by the handy group number display.  We could easily reassign a block of four ports to any required VLAN with a single button, thus avoiding having to navigate through onboard menus or plug in a laptop to configure the Switch.”

Nige adds, “For DMX output, the stage data rack had a pair of IQ Two 88 2x Nodes (main and backup). The dual EtherCon connectors allowed them to be connected to the data network with a degree of redundancy not attainable in many other nodes.  Another IQ Two 88 2x Node was put to use in the guest data rack, where the simple front panel assignment of individual DMX outputs easily accommodated the configurations required by the various guest floor packages.

“From each IQ Node, DMX was distributed via four ProPlex Opto-Splitter 2×8 units, each handling two universes; the Optos’ LEDs, clearly indicating which universe was assigned to each output, helped ensure error-free hookups every time.

“Nuri Waheishi and Anton Sanders of TMB provided excellent support, finding time to visit the Neg Earth warehouse to help with the initial configuration and following up with onsite help as needed.”

Nige Holbrough is a self-described “Freelance Lighting Bloke,” based in Dubai and regularly working summer concerts and festivals in the UK.  He also provides Tech Support and Training for MA Lighting in the Middle East.

Neg Earth Lights is one of the leading independent entertainment lighting and rigging hire companies in the live events industry.  Neg Earth’s core philosophy is to deliver “one stop” entertainment lighting and rigging services with premium levels of support and value.  Whether for project management, design, fabrication, and crew for large-scale music festival, concert tours, theatrical production, and corporate events. Neg Earth is fully committed to the success of any event from concept through implementation, and follow-up.  Learn more about Neg Earth at http://www.negearth.com.

TMB is the exclusive distributor worldwide for ProPlex Data Distribution:  http://www.tmb.com/control-data.  Learn about other exciting products from TMB at www.tmb.com.